Golf cart batteries are a kind of storage battery, its role is to store the limited power, in the right place to use. At present, mainly in the use of golf carts, electric sightseeing cars, electric see car, electric sweeping machines and other products 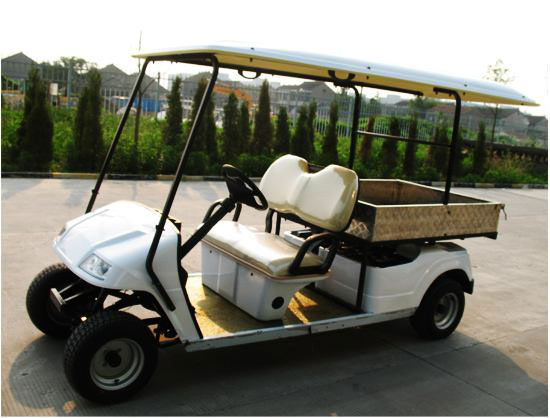 The maintenance of the golf cart battery

1. Battery for a long time do not, it will slowly discharge their own, until the scrapped. Therefore, Every time you should start a golf cart battery, for battery charging.

2. When the ammeter pointer shows the lack of electricity, it is necessary to charge in time. The battery electricity power can be reflected in the dashboard. Sometimes found electricity power is not enough in the road way, Engine flameout don't start again, as a temporary measure, You can ask the other vehicles for help, with their vehicles on the battery to launch the vehicle, the two batteries connected to the negative and negative, positive and positive connected.

4. In the loss of electrolyte should be added to the distilled water or special rehydration. Avoid used pure water instead. Because pure water contains a variety of trace elements, the battery will cause adverse effects.

6. Charging to use a special charger, placed in a cool and ventilated place, to avoid high temperature and humidity

7. Do not use organic solvents to clean the battery case

8. Do not short-circuit the positive and negative terminals of the battery to avoid danger

9. prohibit over discharge: When the instrument panel red undervoltage indicator light glow, indicating that the power into the hunger area, should be charged

10. prohibit overcharge: charging time should be based on the length of travel varies, the longer the mileage, charging time is long, otherwise short.

11. If the battery pack fails, please send it to the manufacturer authorized office or the relevant authorities to properly handle. Please do not arbitrarily discard to avoid environmental pollution

Driving a 1,500 km golf cart, The road meet special situation need to change to 1 file, the golf car battery lights will be bright, but immediately extinguished, the car is still normal.

Encountered this situation, one reason is because the engine has been a great fluctuation, the battery and virtual access, which may cause this situation in a flash, it is recommended to check the car battery connection.

A high-speed car, mileage of 15200km, in the medium speed (speed 80km / h, the engine speed of 2000rpm) driving, the engine throw speed phenomenon (speed down 200rpm). Sometimes moments for a few seconds, sometimes longer, and then the engine is back to normal work. There is no regularity in the time interval between loss of speed and failure.

Through the overhaul, the fault is due to the engine electronic control unit of the ground wire and the golf car battery negative negative, resulting in the engine computer appears instantaneous control disorders and occasional failures. Because of this failure, the engine computer in the middle of the moment there will be an instant injection control disorders, so that the concentration of the mixture does not meet the requirements caused by power reduction, the need to the maintenance station on the engine electronic control unit ground wire and golf car battery connection Processing and cleaning.