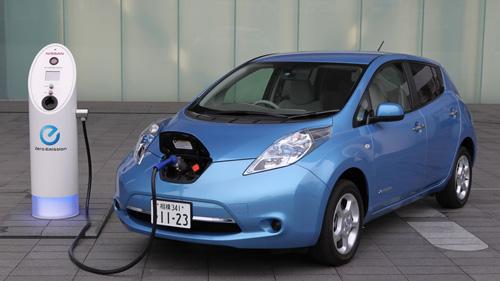 According to Automotive market research firm LMC Automotive, sales of pure electric vehicles will soar to 200,000 in Europe this year.This is largely thanks to the launch of nissan's new Leaf and the rise of a wave of high-end European electric cars.

LMC Automotive forecasts that demand for battery-powered cars in Europe is expected to reach 600,000 by 2020 and nearly 1m by 2022.

The three high-end models will bring more attention to the European electric car market, but they will not have a big impact on overall sales.

"These models are expensive, and charging infrastructure is still a problem in Europe," says LMC Automotive.

Jaguar will release the i-pace electric SUV production speed and pricing in March.

LMC Automotive believes that future sales growth in the electric car industry will be driven by current market leaders.Sales of electric vehicles in Europe will be dominated by tesla's Model 3 by 2020, followed by models such as Renault, BMW i3 and nissan Leaf, the research firm predicts.

Volkswagen will be in the company's MEB manufacturing a range of battery-powered electric platforms ID models, including ID (compact hatchback sedan), ID CROZZ (compact SUV), ID Buzz (commercial vehicles), is expected to be listed in 2019.

According to JATO Dynamics, a market analyst, in the past 10 months, the top five car companies in 2020 are expected to be very similar to 2017, led by Renault's Zoe.

At last year's Paris motor show, Renault unveiled a new electric car, Zoe ZE 40.The new car carries a new 41 kilowatt-hour battery pack with a maximum range of 400 kilometers.That has boosted Zoe's sales by 49%, ahead of the first Leaf and the third-placed Model S, which is ahead of BMW's i3. 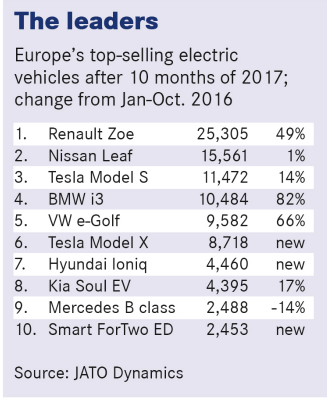 JATO data show that, while Germany occupies a leading position in the whole car sales, but in the last 10 months, Germany's electric car sales is only 18000, accounts for only a third of the electric vehicle sales.Norway accounts for a fifth of new car sales worldwide.France came in second.

However, according to LMC's estimates, the upcoming electric cars of German brands such as Volkswagen will change that.

LMC expects Germany to become Europe's largest electric vehicle market by 2019, with sales of 71,000 vehicles, with the total number expected to reach 200, 000 by 2022.In the same year, Britain will overtake France as Europe's second-biggest market for electric cars. 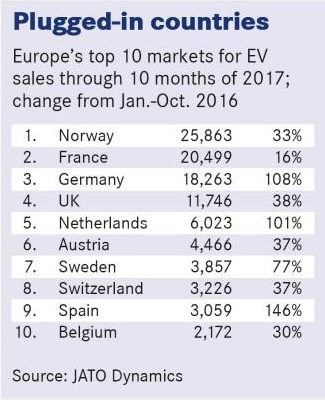 The growth of electric vehicle sales will be crucial for carmakers to meet stricter emissions targets.

"E-mobility will be a key factor in meeting statutory emissions requirements and addressing financial challenges," vw said in a statement last November.

Volkswagen will release its electric ID CROZZ compact SUV in 2020 and launch the electric ID Buzz business model in 2022.

On the eve of last year's Frankfurt motor show, the Volkswagen group issued a comprehensive electric strategy to officially launch "Roadmap E".Volkswagen group said that by 2030, the entire lineup of models will be electrified.At that time, Volkswagen group's brands, covering more than 300 models of each market will launch at least one electric version.

Volkswagen group expects to sell about a quarter of its new cars to pure electric vehicles by 2025, including 50 pure electric models and 30 plug-in hybrid models.

Mercedes will launch more than 10 pure electric models under the EQ brand by 2022.The EQC pure electric SUV will be introduced in 2019.

Ford, Peugeot, Citroen, Mini, Volvo and skoda are expected to launch all-electric models by 2020 or sooner.

That would remove one obstacle to growth in the industry: the limited choice of brands.JATO global analyst, felipe?Munoz (Felipe Munoz) said: "we only discussed the current 25 pure electric vehicles, only two of them are sports utility vehicle (SUV), and both have not into the mass market."