Learn about different battery systems, explore future trends and discover which chemistries are most promising.

According to The Freedonia Group, a Cleveland-based industry research firm, the world demand for primary and secondary batteries is forecasted to grow by 7.7 percent annually, amounting to US$120 billion in 2019. The real growth lies in secondary (rechargeable) batteries and according to Frost & Sullivan, secondary batteries account for 76.4 percent of the global market, a number that is expected to increase to 82.6 percent in 2015. The demand is driven by mobile phones and tablets. Earlier estimations over-estimated the demand for electric vehicles and the figures have since been adjusted downwards.

In 2009, primary batteries made up 23.6 percent of the global market and Frost & Sullivan predicted a 7.4 percent decline by 2015. Non-rechargeable batteries are used in watches, electronic keys, remote controls, toys, flashlights, beacons, and military devices in combat.

An Overview of Battery Types

Batteries are classified by chemistry, and the most common are lithium-, lead-, and nickel-based systems. Figure 1 illustrates the distribution of these chemistries. At a 37 percent revenue share, Li-ion is the battery of choice for portable devices and the electric powertrain. There are no other systems that threaten its dominance today.

Lead acid stands its ground as being a robust and economical power source for bulk use. Even though Li-ion is making inroads into the lead acid market, the demand for lead acid batteries is still growing. The applications are divided into starter batteries for automotive, also known as SLI (20%), stationary batteries for power backup (8%), and deep-cycle batteries for wheeled mobility (5%) such as golf cars, wheelchairs and scissor lifts.

High specific energy and long storage have made alkaline more popular than the old carbon-zinc, which Georges Leclanché invented in 1868. Nickel-metal-hydride (NiMH) continues to hold an important role as it replaces applications previously served by nickel-cadmium (NiCd). However, at a 3 percent market share and declining, NiMH is becoming a minor player.

New markets that further boost battery growth are the electric bicycle and storage systems for renewable energy, from which homeowners, businesses and developing nations are benefiting. Large grid storage batteries collect surplus energy during high activity and bridge the gap when the input is low or when user demand is heavy.

Batteries are advancing on two fronts, reflecting in increased specific energy for longer runtimes and improved specific power for high-current load requirements. Improving one characteristic of a battery may not automatically strengthen the other and there is often a compromise. Figure 2 illustrates the relationship between specific energy in Wh/kg and specific power in W/kg. 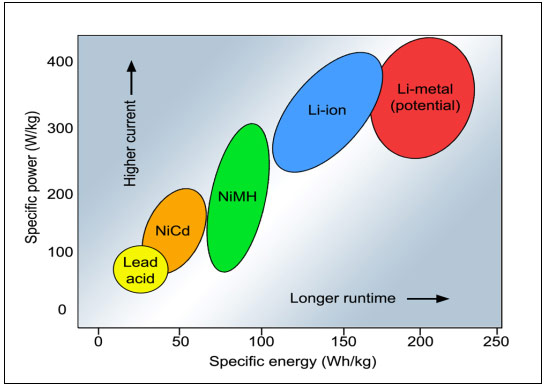 Specific energy is the capacity a battery can hold in watt-hours per kilogram (Wh/kg); specific power is the battery’s ability to deliver power in watts per kilogram (W/kg).

The best performing battery in terms of specific energy and specific power is the secondary lithium-metal (Li-metal). An early version was introduced in the 1980s by then Moli Energy, but instability with metallic lithium on the anode prompted a recall in 1991. Solid lithium tends to form metal filaments, or dendrites, that cause short circuits. Further attempts to solve this problem by other companies ended in discontinuing the developments.

The unique qualities of Li-metal are prompting manufacturers to revisit this powerful chemistry. Taming the dendrites and achieving the desired safety standard may be achieved by mixing metallic lithium with tin and silicon. Graphene is also being tried as part of an improved separator. Graphene is a thin layer of pure carbon with a thickness of one atom bonded together in a hexagonal honeycomb. Multi-layers separators that prevent the penetration of dendrite have also been tried. New experimental Li-metal batteries achieve 300Wh/kg and the potential is much higher. This is of special interest for the electric vehicle.